The topic of apartment monitoring is not only a matter of protection against possible thieves, but also the realization of the saying "to keep an eye on something", in this case on your own apartment. It is useful, e.g. when we have pets (dog or cat) in the house and we just want to check what is happening in the house in our absence. Recently I had an opportunity to test one of the newer cameras of such home monitoring - Reolink E1 Pro.

E1 Pro is a small size camera (107 x 76 x 76 mm), which can be placed virtually anywhere. Its shape is pleasing to the eye. It resembles a white ball placed on a white base. The shape is not accidental. The camera rotates 350 degrees around its vertical axis and 50 degrees in the horizontal axis (up and down).

Configuration of the camera is simple and is done through the app for iOS or Android. During the first connection you have to scan the code placed on the bottom of the camera using the dedicated application, you also have to enter the password for the home WiFI network to which it will be connected.

Thanks to a very wide range of pan and tilt, the camera can actually cover almost the entire room. Pan and tilt is controlled by means of a dedicated application for iOS or Android. Let me just mention that there is some delay here, which is sometimes annoying (when you move the virtual joystick one or two times too much before the camera responds). 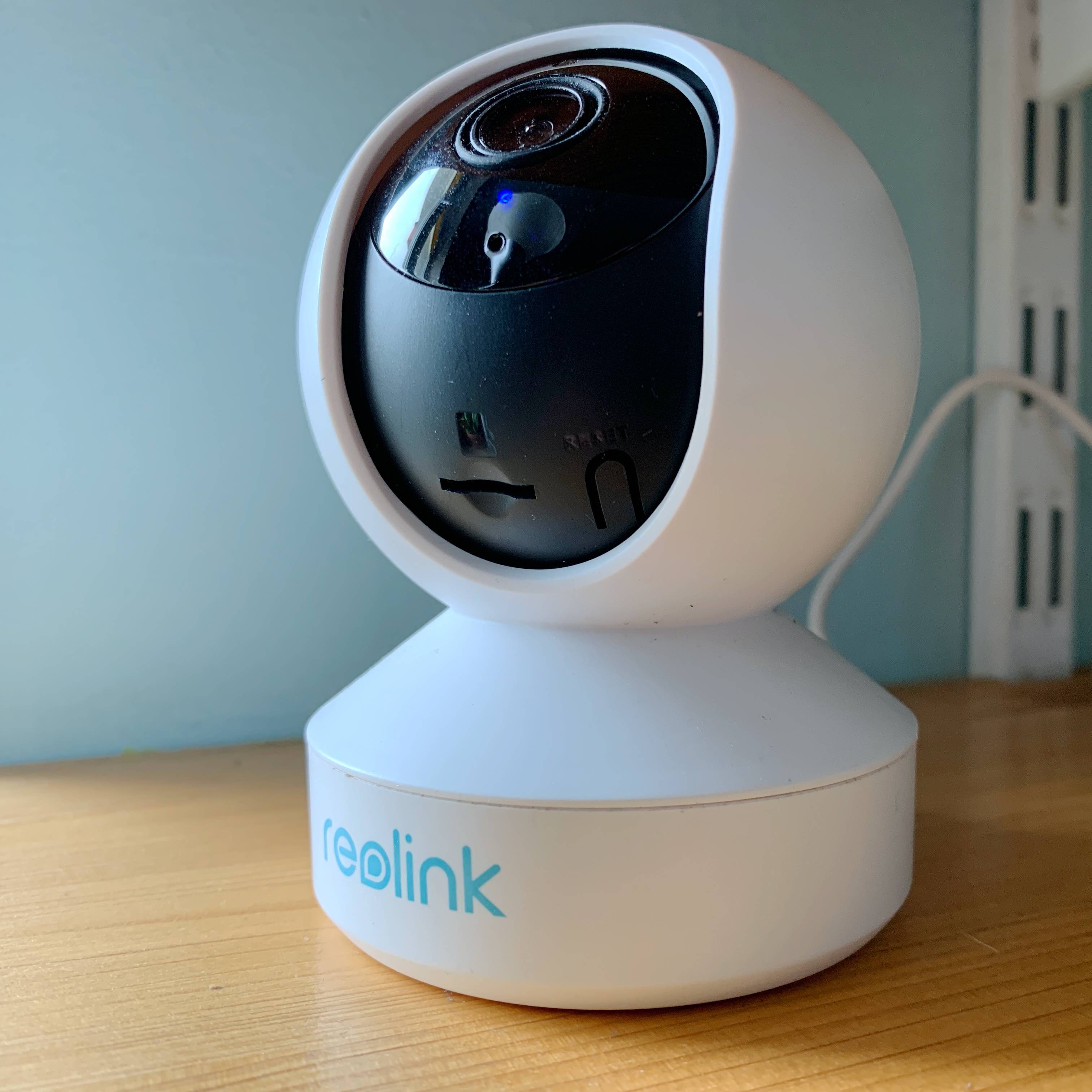 I am very impressed with the quality of the image captured by this camera. It offers a resolution of 4 MP, which translates into a QHD image of 2560 x 1440 pixels. The difference is definitely in favor of E1 Pro compared to cameras that offer only Full HD or HD resolution. With Reolink E1 Pro you can see really small details. The camera of course offers three modes of operation in low, balanced and high resolution. The better the image the more data to upload and the more delay can be. In my case, with 1GB of fiber optic link at QHD resolution with the highest quality, the latency for sending video and voice was about 4 seconds. In balanced mode it was less than one second. It adjusts the resolution of the transmitted image so as to balance its good quality and transmission speed. So I usually chose this default camera mode. 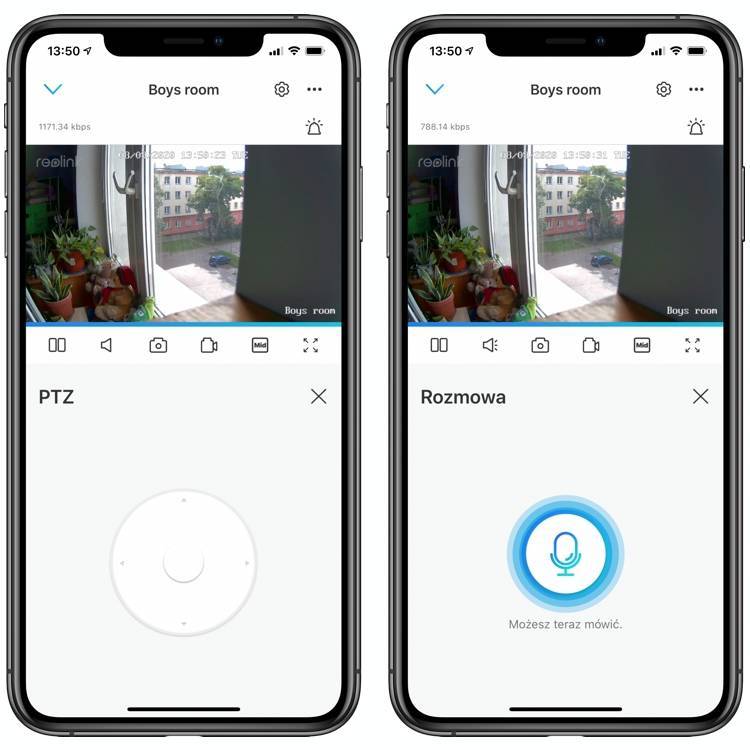 Reolink E1 Pro also offers a night vision mode for a distance of about 12 meters, which is enough for an apartment. The possibility of two-way voice communication is also very useful. Often it is easier and faster for me to contact my children through the camera than by calling them (e.g. when their phones are unloaded). The built-in loudspeaker provides good sound quality so that the voice reproduced by it is clear and loud. I can say the same about the built-in microphone. However, you should also remember that depending on our connection at home and in the field there will be some delay. In my case it usually amounted to less than a second. 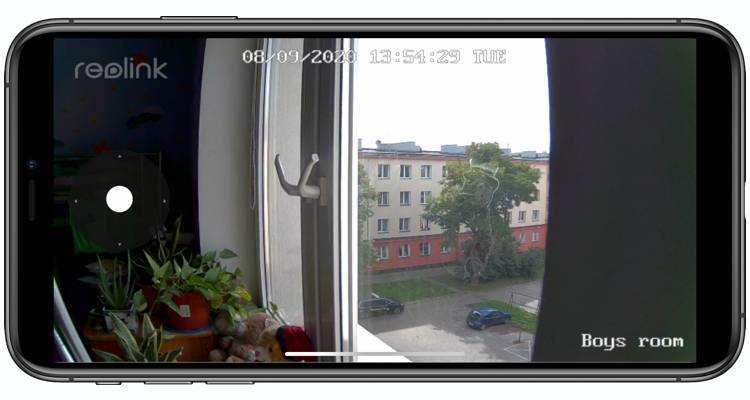 Reolink E1 Pro also offers some useful features already closely related to monitoring. The built-in motion sensor can trigger automatic recording on a microSD card (up to 64 GB) placed in the reader. In some countries, unfortunately not in Poland, there is also a Reolink Cloud service available, where the user can buy a backup in the cloud in case a thief takes a camera with the card or damages the latter. You can also set recording schedules and specify areas where the detection will work. If motion is detected, the camera can send notifications via iOS or Android apps or by e-mail. It can also activate an audible alarm. 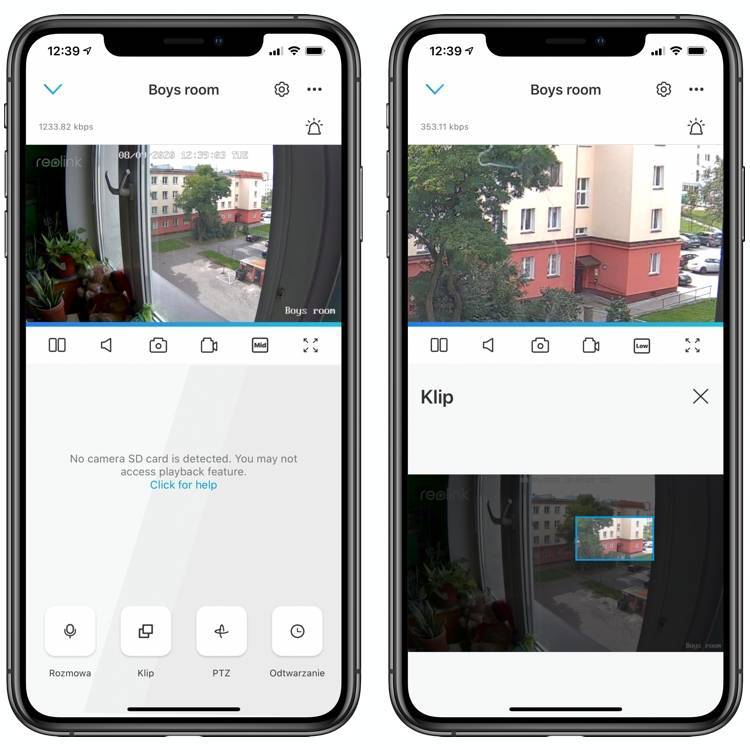 Reolink E1 Pro can also be connected to a network video recorder, also available from this manufacturer. Two separate versions are available, 8- and 16-channel.

A dedicated application allows you to control not only this one, but also other Reolink cameras. Its operation is simple. Full screen mode is available, you can activate voice communication, control camera movements, etc. An interesting function is a clip, which is an enlarged section of the live image.

Two weeks of tests did not bring any unpleasant surprises. The camera was doing an excellent job in monitoring, motion detection and voice communication. What's important is that it did not get hotter. Reolink E1 Pro offers a lot of features and many configuration possibilities and - what is probably most important - great image quality at a really low price. This camera costs only 50.99 €. This is a fraction of the amount you have to pay for static cameras that offer poor image quality and can overheat.

If I were to write about the flaws of the Reolink E1 Pro, from the point of view of the user of Apple products, I would only mention one, the lack of support for HomeKit. Instead of using HomeKit application, I have to use dedicated Reolink program. However, I found out that it doesn't bother me at all.