The Sonos brand does not need to be introduced to MyApple readers. It's one of the manufacturers of the best, in my opinion, multi-room systems, with compact speakers such as One or larger Play, portable Move (all described on MyApple) or subwoofer Sub. The offer also includes soundbars, the older Beam (which is also being reviewed) and the latest Arc, just being introduced to the market, being the first Sonos device with Dolby Atmos surround sound technology support. I had the pleasure to test it a few weeks before its market launch.

It is difficult to confuse Sonos products with others, both in terms of sound and design. So it should not come as a surprise to anyone that the new product will look as good as other speakers of this brand. But I was surprised by the size. Unlike the short Beam soundbar, the Arc is long (114 cm), I would say even very long. You can see, that the device was created with the latest trends on the audio-visual market in mind. The TV sets are getting bigger and bigger. Once 55 inches in the living room was a fad, I complained myself, that from such a big screen my eyes are coming out of orbit. Today I have a 65-inch Samsung Q60R. I mention the size of Sonos for a reason. Of course, a longer soundbar is an advantage, but it causes potential problems with setting it up. It may turn out, that it will not fit on every TV set or - as it was in my case - the TV's legs protruding forward will effectively make it impossible to set it up (eventually I had to move the TV set very much back, actually to the edge of the set). Of course the Arc can also be attached to the wall. The Soundbar will automatically adjust to this orientation. 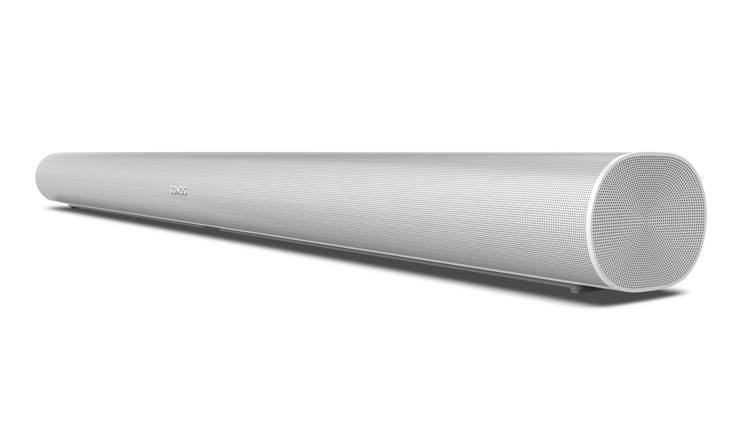 I had a chance to test the white model, which looks as good as black. I associate white Sonos' speakers unambiguously with white MacBooks, although black is, in my opinion, a much more neutral color (fits virtually everything).

The soundbar resembles a flattened cylinder. Its casing and grille is made of matt finished strong plastic with 76 thousand holes drilled (I admit, I didn't count). The whole is of course characterized by minimalism known from other Sonos products. The only additional element is a small Sonos logo placed centrally.

On the upper surface, also in the middle of the speaker's length, there are tactile control buttons. Slightly above the Sonos logo, under the grille, there is an LED showing the operating status of the device. What is important is that this LED adjusts the intensity of the light emitted by it to the ambient conditions. So it will not be annoying or distracting during movie screenings or at night. On the back, also in the central part, there is an HDMI port, power socket, ethernet port and a pairing button known from other Sonos devices. 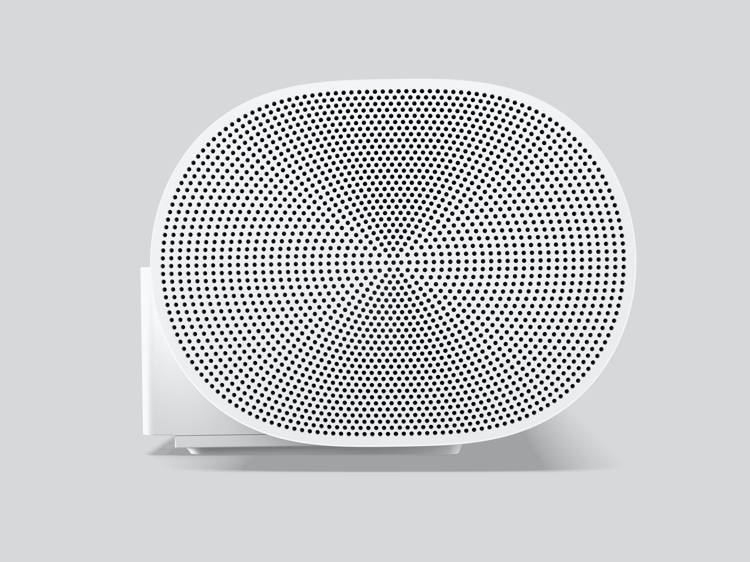 Sonos Arc is equipped with a single HDMI socket. To enjoy Dolby Atmos sound, the soundbar must be connected to the HDMI ARC socket on the TV.

The whole connection procedure is simple and fast and is done through a dedicated new application. At the end of the application you should (although it is not obligatory) configure the soundbar for the selected room using the Trueplay function. iPhone or iPad collect special test sounds emitted by the speaker in different places, so that the sound is as good as possible in every place you sit in front of the TV.

Sonos Arc works with a brand new Sonos application that is part of the new S2 platform (the application and operating system that brings, among other things, zone creation and wider streaming bandwidth). The new application is only slightly different from the older one. It allows to add new devices, manage them, play music from selected sources, including streaming services. In fact, however, I used it only for adding soundbar to the multi-room system. On a daily basis I used Apple Music (just like other devices of this brand I tested earlier, it supports AirPlay 2) or Tidal.

It is worth mentioning, that after the process of adding it, it is worth to perform a special calibration using the Trueplay function, which adjusts the sound to the size and conditions of the room. There is also support for Google and Alex's assistants, but I admit that I did not test them.

Sonos devices have been offering great sound for years. In this respect Sonos did not surprise (do not disappoint). Soundbar sounds great. The spatial sound reproduced by Sonos Arc during film screenings was very impressive. This is due to 11 speakers driven by separate Class D amplifiers. When watching sensational and adventure films you could actually hear planes or helicopters flying over your head, with a clear separation between the one that flew more to the left and the one that flew more to the right. Watching this or that movie or series I had the impression that I was sitting somewhere in the middle of the stage and the action was almost all around me. The sound was clear and dynamic, the details and flavors in the background of the soundstage were not fuzzy by those in the foreground. I also did not complain about the lack of bass, although I did not have the opportunity to test it with the already mentioned Sonos Sub subwoofer. What's important is that the main dialogues and the voice of the speaker were still coming from the front. You can hear here the separation of the dialogue track from the spatial background sounds and conversations in the background. Thanks to this, both the dialogs themselves and the voice of the speaker are very clear. 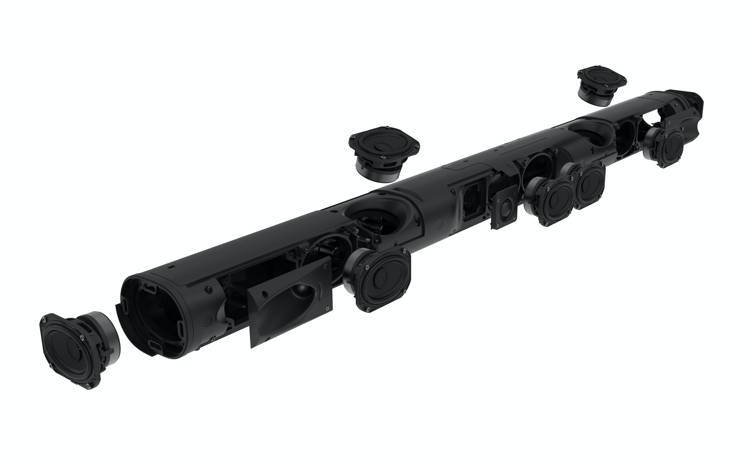 Even better effect was achieved by connecting two Sonos One satellites. Interestingly, such a solution also works well when listening to music through Sonos Arc.

Sonos Arc also handles music very well, although it does not play like a classical stereo. The sound is still spatial, which does not have to fit everyone. In my opinion, it gives the music even more air, which can be heard especially in those tracks where the producer didn't pack individual parts of the instruments too tightly, and this spatiality sometimes helps. The sound is as dynamic as in the case of movies, which many tracks gain from, although it is certainly not the same as the producer heard in the studio from his monitors.

Sonos is one of those producers who, in my opinion, have not yet had a weak product. There is nothing to attach here, and possible comments are already related to the purely subjective assessment of the user. Actually, the only thing you can complain about is the price, which is 3899 PLN, but competitive solutions are available for similar money.