Recently I wrote about Logitech mouse- MX Master 3. This company has also prepared a new keyboard model, which together with that mouse will make a set. We are talking about MX Keys. But is this model completely new? In my opinion, no, and why I think so, I will explain later in this text.

Logitech keyboards are, besides mice, popular accessories among users of all types of computers, whether Macs or Windows PCs. This is why many of the more expensive keyboard models from this company have a universal keyboard layout, with function keys for both MacOS and Windows. I also wrote in a review of the Logitech Craft keyboard that a good external keyboard is a necessity for many users of 12-inch MacBooks, MacBook Pro with Touch Bar and the new MacBook Air with Touch ID, and Logitech keyboards usually work, although not always (see below). 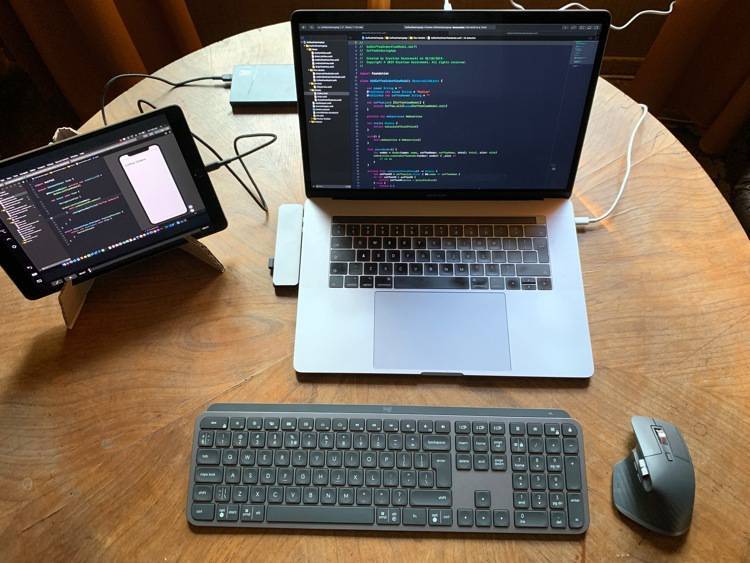 MX Keys is a full-size wireless keyboard with a separate cursor control block and number block. Its casing is made of strong plastic, which is a bit like aluminum. Illuminated keys are large and have a characteristic concave surface with a circle shape. I strongly associate it with the form of the ZX Spectrum computer keyboard, although there the keys were not concave, and the round part protruded above the flat surface. Of course, this association does not concern the operation and quality of the keyboard itself, but only its form. I already had an identical association once. I wrote about it in a review of the Logitech Craft keyboard and it is not a coincidence. I'll also mention that the device is quite heavy, so it lies stable on a desk or table top, does not move and does not jump while writing. It is a really decent piece of keyboard. 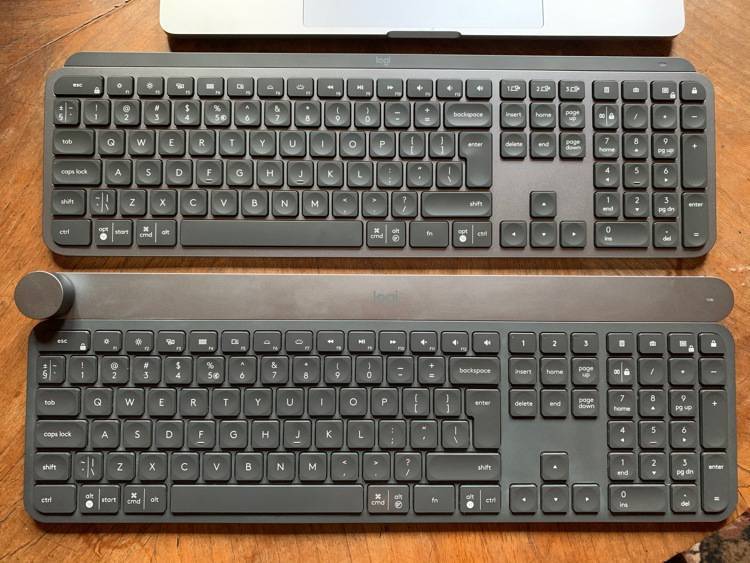 Of course, the key stroke is much larger than that of the keyboard in the aforementioned MacBooks, MacBooks Pro and MacBooks Air, and it is also significantly higher than the key stroke in older models of these computers, and identical to the key stroke in the Logitech Craft keyboard. For a person switching to this keyboard, typing on it will be a strange experience at first, but you'll soon get used to this higher pitch. I've been jumping from the keyboard of my MacBook Pro with Touch Bar for a long time now to the already mentioned Logitech Craft keyboard several times, so switching to MX Keys was no problem for me.

I have to mention one more thing, just like in Logitech Craft, here the right one - the mac key ALT/OPTION was moved further to the right and separated with CMD function key. This may actually disqualify this keyboard when it comes to potential choice by Mac users in Poland. Moving this key to the bottom right corner, and thus moving it even further away from the space, makes entering Polish diacritics with one hand impossible. Of course, you can enter these characters on the right side of the keyboard with the fingers of both hands, just like you can do with "ą" or "ę" characters, or use the left ALT/OPTION key. I do not have this problem. Since the beginning of my adventure with Macs I've been reversing functions in CMD and ALT keys. In all my Macs from the first iMac in 2007 to the current MacBook Pro, the CMD key function is taken over by ALT and the ALT function is taken over by CMD. I used to do it with additional software, but for years now it is possible to change the function of both keys directly in the MacOS keyboard settings. Therefore, I do not feel any discomfort when using Logitech keyboards, whether Craft or MX Keys. I enter Polish characters either with the left or right ALT key, which is always in space with me, while I always use only the left CMD key, so in this case - after swapping functions of both keys - moving the right CMD far to the right does not matter to me. However, I know that my case is quite strange, and I know that usually when one of my Mac users friends has to do something on my computer, it is a big and annoying challenge for this person.

However, to be able to flip the keys in MX Keys, I need, as with Logitech Craft, to connect this keyboard by radio using the included receiver or any other supplied wireless Logitech mice and keyboards. Only in this case is the keyboard visible in the Keyboard Settings view in the Settings application. When I connect it via Bluetooth, I am condemned to a standard layout, in which I get lost. As I've already written during the MX Master 3 mouse tests, I'm surprised that Logitech doesn't connect this receiver with a USB-C plug yet, while the keyboard itself already has such a charging socket. USB-C has already become so popular that you could enter such a version of this receiver and add it to the set as well. To connect the keyboard by radio to my MacBook Pro, I need to use an additional hub or adapter.

The built-in battery provides up to 10 days of operation with the backlight on for one charge or even up to five months without backlight. As for the first one, Logitech is not mistaken. I actually charge this keyboard every 8-12 days or so, depending on how often I work on it. I haven't had the opportunity to check the length of work without backlighting, which is especially useful when I write on it after dark.

Many times above I mentioned whether I compared this keyboard with the Craft model. Not without reason I did it. MX Keys visually, but also mechanically, is basically the same keyboard, except that it has no analog knob and aluminum slat on top. The rest is actually the same, i.e. the sizes, keys, their pitch, color, material it is made of, or the angle of its drop to the user's hand. The functional impressions are actually the same as well. MX Keys is therefore not a new keyboard in the full sense of the word. For me, it's a model that's made from Logitech Craft, because not everyone needs an analog knob.

MX Keys is a very comfortable and durable keyboard. You can connect three different devices to it, so besides MacBook Pro I can connect it to my iPad for example. It is certainly a great choice for Windows PC users and Mac users who don't use the physical right ALT key to enter diacritics. So in Poland it will be users who use the left ALT for this purpose or, like me, reverse the ALT and CMD keys.