After two ultra wide and curved Philips monitors, the time has come for a real monster - the super wide Philips Brilliance 439P, which can replace two 16:10 aspect ratio monitors on your desk.

Apart from its size and proportions, this monitor does not differ visually from other Philips monitors of this type. So we have a strong material in black, clearly thicker lower frame with a central logo on it. The control buttons are located at the bottom edge (from the bottom), close to the lower right corner of the monitor. At the back there is a set of sockets facing down.

The monitor has a slightly curved screen with a radius of 1800 mm (1800R). This ensures that the distance between the eye and the individual parts of the screen does not vary too much. However, an ultra wide-angle monitor with a curvature radius of 1500R would be useful.

The clear difference - apart from the size of this monitor, of course - is the leg and foot on which it rests. It is made of dark grey (in Apple's terminology it would be a star-grey) brushed metal. It ideally matches the Mac mini set under the monitor in this color. Both the leg and the foot are made of thick rods. The latter one takes up a lot of space. However, the space in its place is free, so you can successfully set in it e.g. the above-mentioned Mac mini. 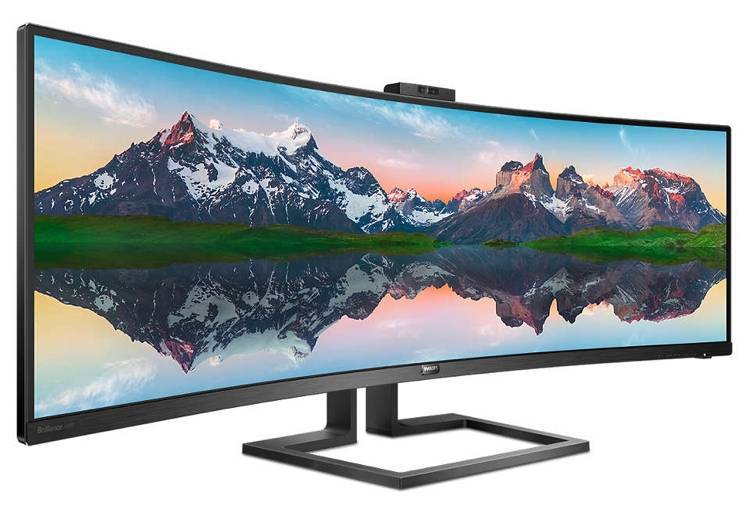 The monitor is equipped with a rich set of ports. So there are two USB-C ports, one of which allows you to power a 75W computer (enough for all MacBooks Pro). In addition, the monitor can act as a USB hub, offering four USB type A ports, including one with quick charge and an Ethernet port. There is also a mini jack headphone jack.

Thanks to its size and resolution, Philips Brilliance 439P can operate in split mode like two separate 16:10 monitors. Simply switch the monitor to the appropriate mode, connect two computers and select them in the source settings.

Unfortunately, none of my Macs, whether running under the control of MacOS Catalina or MacOS Big Sur bets, have been able to handle this monitor since it was connected. The image was either stretched or narrowed, or, as in cinema productions, had characteristic black margins at the bottom and top. As usual in such situations the program SwitchResX, which allows you to select or manually set the resolution for any monitor, proved to be reliable. It was needed on both computers, because even in the split mode both saw only its native resolution of 3840 x 1200, not 1600 x 1200.

As in other Philips monitors described by me in recent months, there is also a built-in camera available here, hidden behind the top edge. It supports not only the Hello face recognition system in Windows, but also works as a webcam with Mac computers. However, the condition is to connect the monitor via one of the USB-C connectors. If connected via HDMI the camera will not work. However, similarly to other Philips monitors, it does not provide a specially high quality (it has a resolution of only 2 megapixels). However, it is certainly an alternative to the webcam that MacBook Pro is equipped with, not to mention Mac mini, which does not have a webcam at all.

I will also mention in one sentence about built-in speakers. It's good that they are but that's all I can write about them.

Philips Brilliance 439P is equipped with a VA LED screen with a diagonal of 43.4 inches. With such a diagonal, 32:10 aspect ratio and a resolution of 3840 x 1200 pixels, the density of the latter is 93 PPI. In addition to the size and proportions of the screen, the monitor also drew my attention with a very good contrast (declared by the manufacturer 3000:1) and deep black. In terms of colors the monitor works best in sRGB mode. It should be mentioned that it is certified by VESA DisplayHDR 400. The colors then become even more vivid. Declared brightness is 450 cd/m2.

Like other Philips monitors, this one also offers several modes of operation, such as easy reading, office, photos, video. games, economical, low blue light emission, etc. And just like in other monitors of this brand, none of them appealed to my taste.

The Philips Brilliance 439P impresses with its super widescreen bright color display, the surface of which equals two 16:10 widescreen monitors. Its size and proportions, however, will not appeal to everyone. Not everyone needs such a working space. I see its use in all applications where a large window width is important and which we often work with in full screen mode on traditional monitors, e.g. audio and video editing programs, code editing programs etc. Working with such applications is very convenient on this screen. You can have a preview of a larger part of the track, even if it is enlarged. It is also great for working with several applications. It provides a workspace that allows you to conveniently place windows of several applications next to each other without the need to narrow them down.

It will also be useful in places where you work on two computers at the same time and where you would normally have to use two separate monitors. Thanks to the function of dividing the screen between two sources, we can replace these two separate screens with one. Instead of putting two screens with 16:10 aspect ratio next to each other you can put one Philips Brilliance 439P. You should also remember that you may need additional software, e.g. in the form of the mentioned SwitchResX, if your computer will not be able to handle the resolution of this monitor.

You should also remember about its size. You need a lot of space for it. In my case, the monitor has almost "on contact" on your desk. It is worth remembering this, because it may turn out that its setting will require a serious reorganization of the workstation.