It is amazing how the Mini Cooper story went. After all, it was a very cheap, common car for the British - on the day of its premiere it cost only 500 British pounds, which translates into the current 47500 PLN. This budget vehicle quickly became an object of cult. No wonder that it is no longer a budget car, but a premium car. The newest electric Mini Cooper Se, which has been available in Poland since April, clips the history of this brand. This small car was created as a response to the fuel crisis related to the blockade of the Suez Canal.

Mini Cooper cars have always looked phenomenal. It is no different for the electric Mini Cooper Se in dark green that I tested.

The car is small like an old, classic Mini from the 70s or 80s. The green color of the body breaks through the white roof and mirrors. Of course, as in every new Mini, there is a lot of symbolism referring to the British flag. These include the rear lights, illuminated pattern on the passenger side of the board, the British flag on the steering wheel and various interior elements. What draws attention to the exterior are small seledyn-silver emblems "E", indicating that this is an electric car. 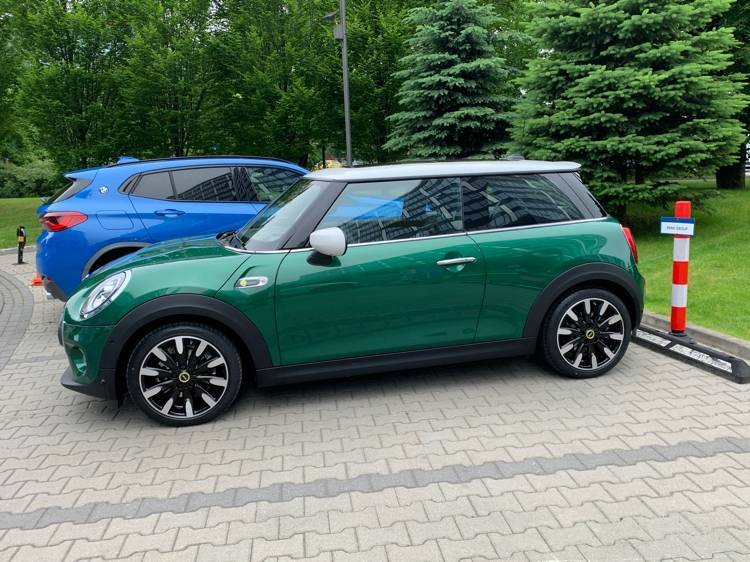 Mini Se is, of course, an electric version of a diesel car. Thus, it has elements of the silhouette characteristic for combustion cars, such as the front grille of the radiator - also a characteristic element for cars of this brand - and the air intake on the hood. The first one has been built with gray plastic, which I do not like very much. Effectively, the green license plate placed on this grey plastic is a distraction to the eye. These - at least in Łódź - are still very impressive.

Mini is a premium brand, which is visible not only on the outside but also inside. I had a chance to park next to Tesla and this difference in some stylists' sensitivity is, in my opinion, very visible, and the differences are in Mini's plus. This is not my opinion, anyway. The owner of this very white Tesla (whom I greet on this occasion and with whom I met at the charging station of course) couldn't help but delight in the refinement and quality of workmanship of even the smallest elements. That's the way it is, although after a week's ride I'll stick to a few details, as follows.

I mentioned that the tested Mini Cooper Se is a small car. You can see it especially from the trunk. Apart from small purchases, nothing will actually fit there. In the middle of the place there is certainly enough for two adults. My children could easily fit on the rear seats, but they themselves pointed out that there is not much room for legs and a longer journey would not be comfortable anymore. However, such a longer journey in case of this car is quite a challenge, due to its range, which is also discussed later in this text.

The seats themselves are very comfortable, both in the front and in the back. They are well shaped, even a few hours of sitting in them does not tire. Comfort is improved by a comfortable and adjustable, wide armrest with a smartphone compartment and induction charging. Here, however, I was not surprised. The iPhone XS Max or other larger smartphone will not fit there, and yet we live in the age of almost ping-pong rackets. So I could not hide my iPhone there and charge it with electricity from the car. It took the place of a recess for cups with drinks.

The dashboard is also phenomenal. Panel with clocks is a small display on which you can see the current speed and current power consumption (when you step on the gas pedal, the pointer jumps to 100%, at constant speed it drops to 30%). Besides, it also contains information about the range at the current battery status, information about speed limits, etc. During charging it is on this panel placed behind the wheel that displays information about the level of energy in the batteries and the expected time remaining to full charge. 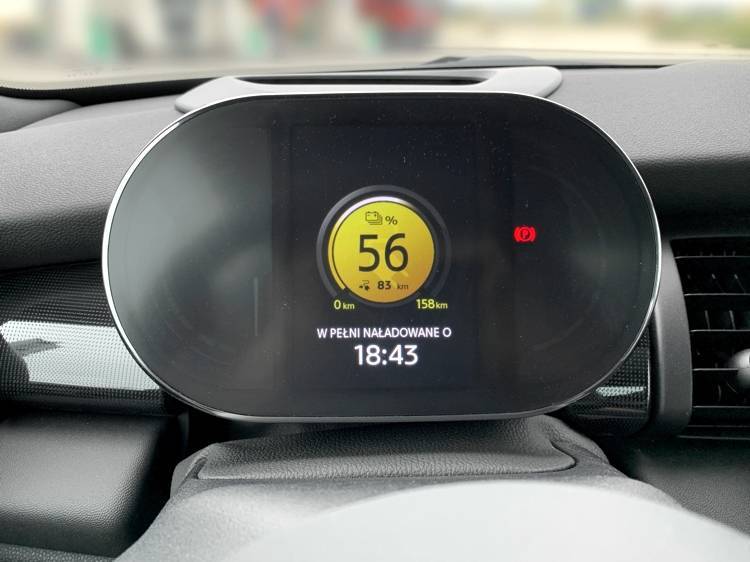 However, the most eye-catching is the round panel with the on-board computer screen placed in the middle, which is characteristic for all Mini, not only for the electric one. The circuitry of this panel is illuminated in different colors and, depending on the situation, shows the energy level in the car batteries, volume setting, air conditioning, etc. Together with the retro-style metal switches of the various functions of the vehicle, located below, the board in its central part makes an impression of some old military radar station or hellish machine of some crazy scientist from the SF movies of the 40s or 50s. 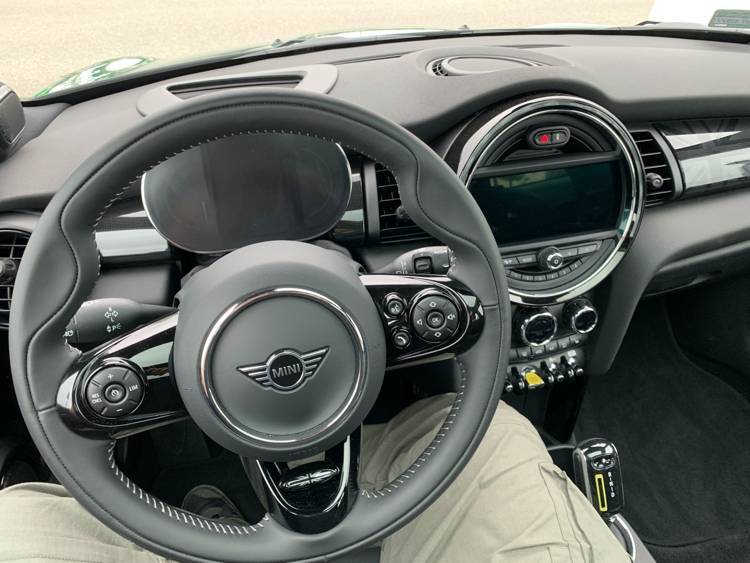 All the switches, the driving mode lever, the handbrake switch, the handlebars and buttons placed directly on the steering wheel, as well as other items, are located so that you can easily find yourself. The last seven days were my first adventure with the Mini brand, and getting into this car for the first time immediately felt like home.

Despite the relatively small interior, the center makes an impression of a large one, thanks to two sunroofs, from which the front one is opened. Both can of course be covered if the sun is too sharp. 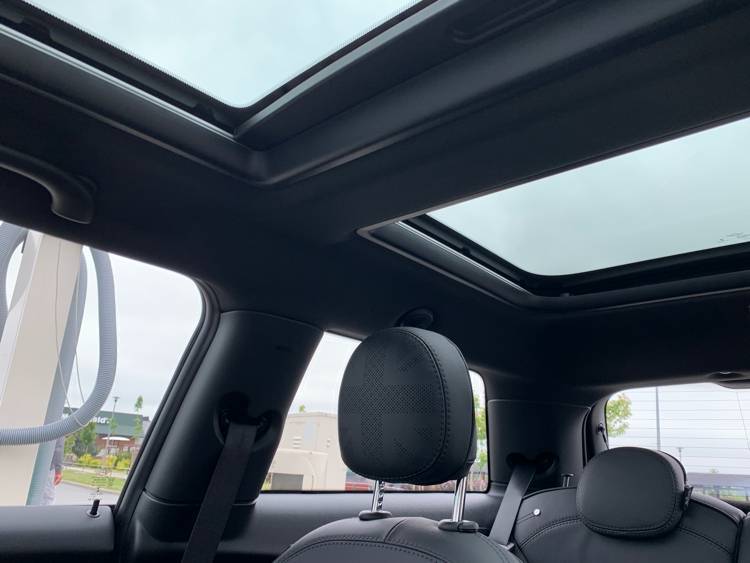 Apart from the mentioned phone locker, I do not have anything to attach to. Everything is well thought-out and the design combines elements of modernity with retro style.

On the frame of the license plate in the Mini Se under test there is an inscription "Mini. Karting fun from driving". It is true. Due to its size, but most of all the engine with immediate torque, this car can actually be driven like in karting, which - I'm not hiding - is useful not only in the city, but also on a crowded highway (when you have to break into a string of cars driving on the left lane).

It amused me many times when I was standing on the traffic lights next to clearly overloaded with testosterone Golf owners, but also other, mainly German or American brands, and when the green light came on I left them far behind. I can say that I discovered the pleasure of overloading at the start, which I do not experience every day with a car with a 1.6 petrol engine without turbo. The electric engine in the Mini Se beats most of these combustion engines on the head in this respect. I don't have to mention that the car doesn't smell, I don't have to mention (the question of what electricity is produced from in our country is a completely different discussion). 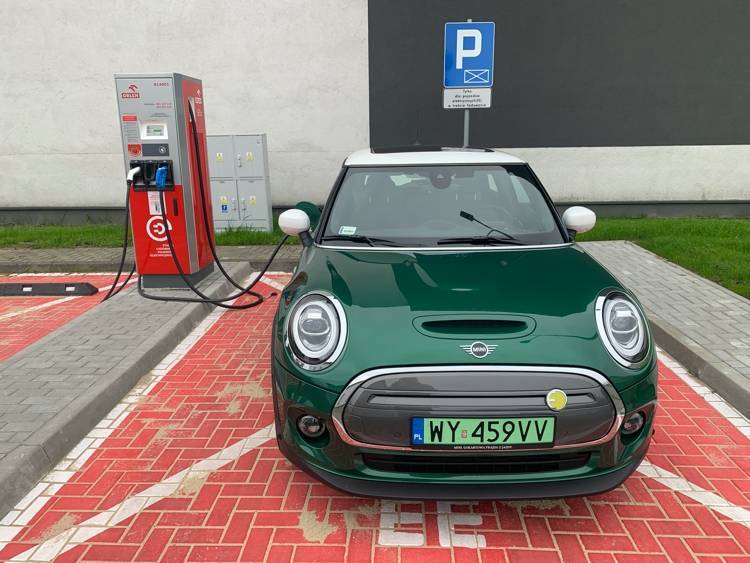 But something for something. Mini, not only because of its size, but also because of its battery capacity, is an outstandingly urban car - and in this case it works perfectly. I have to recharge it every 3-4 days during my everyday driving. I could do it at one of several free fast charging stations available in Łódź. This car will work even better if you have a garage with an electric socket or a house. While visiting my family in the suburbs, I parked in the garage and plugged it in for the night to an ordinary electrical outlet (the appropriate cable is in the glove box in the trunk). It is worse if you live in a block of flats or a tenement house. In this case you are doomed to use the above mentioned stations, although there is no problem with that yet - the place will always be somewhere.

It is definitely worse if you think about some further departure. Thinking about going out of town for a long weekend for one day, e.g. to Toruń or Wrocław, I realized the risk of such a trip. Of course, this is due to the still insufficient infrastructure in our country. However, this is a significant limitation. Theoretically, I would get to Torun, because on the way there is at least one paid station for fast charging of Lotus and two GreenWays, but that means over an hour's stopover both ways. What's worse, I don't have a guarantee that it won't be busy, and this can extend the journey over 200 km to several hours. It would be even worse if it turned out to be broken. Then I would have to look for some good soul with an electric socket, and that would take at least a few hours. After all, the only longer routes I made with this car were from Warsaw to Lodz and from Lodz to Warsaw.

The range of a car with a fully charged battery obviously varies depending on the driving style. In my case it is about 155 km. What's interesting, electric Mini Cooper Se at maximum speed on the highway will drive only an hour. Its maximum speed is 153 km/h. It will not go any further. So if you want to overtake the truck with it, driving into the left lane, it may happen that you will find someone who drives faster and who will pass you the "long" lights.

The electric Mini Cooper Se has a dedicated app for iOS (and probably for Android) that allows you to lock/unlock your car, check your driving statistics and view the charging. 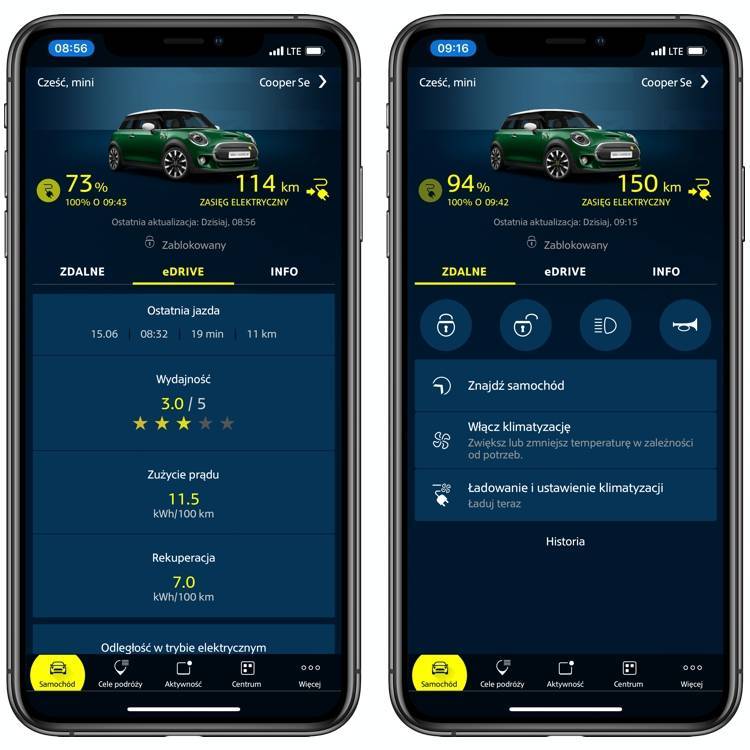 Stylish car for a city single

The electric Mini Cooper Se is a car that is hard to call a universal car, but I don't think any Mini is (except maybe for Countryman). This car is chosen because of its characteristic line and style, accepting all the related restrictions. An electric Mini Cooper Se like no other car is simply a kind of demonstration of its owner. And it is not a drawback at all. This car seems to be created for an expressive, extraordinary single or equally expressive, childless couple living in a big city.

The above mentioned inscription on the license plate frame says everything in my opinion. The fun of driving this car around town is simply incomparable to anything else.